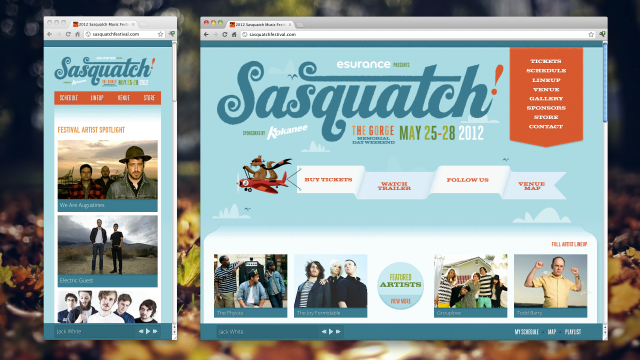 The website for Washington's Sasquatch Music Festival responds automatically to the width of the browser's window.

When you consider how many different tablets, laptops, Web browsers, and operating systems access the Internet on a day-to-day basis, it's a small miracle that Web designers and developers manage to stay sane. There are, of course, Web standards and entire organizations that exist for the sole purpose of making sure the Internet you see is generally the same Internet that everyone else sees. But the sheer number of devices can pose a bit of a problem when you're attempting to create a site or service that works well for the masses.

In the past, a developer or designer might code a different site for desktop and mobile users, often with some or all of the same functionality. For the most part, in fact, this is still how things are done today. But in some cases, that's beginning to change. A relatively new technique called "responsive design" has been gaining traction over the past few years, and it's promising to change the way we code and interact with the Internet on devices of all shapes and sizes.

Responsive Web design, as the name implies, is a style of Web development where content responds to the device on which it is being rendered. So, while a website viewed from within a traditional desktop browser might be rendered one way, a tablet or smartphone browser will be smart enough to render that same code in a different way—one that takes into account the size and resolution of a smaller screen. Text is reflowed, navigation is simplified, and images are shrunk, or even hidden entirely, and the code to do it all needs only be written once.