Today we launched the “Netflix ISP Speed Index,” a new Web site that gives consumers insight into which Internet Service Providers (ISPs) provide the best Netflix streaming experience.Located at http://ISPSpeedIndex.Netflix.com/ the new Web site provides an easy overview of the performance of ISPs in several of the countries Netflix is available in. Updated on a monthly basis, the site allows for easy comparison of ISPs in a country as well as international comparisons. At launch the Netflix ISP Speed Index includes data for the U.S., Mexico, Ireland, U.K., Norway, Sweden, Denmark and Finland.A few data points from the new Netflix ISP Speed Index, reflecting data for February:
The launch coincides with the release of our February ISP Rankings, which are on the ISP Speed Index and also below for just the U.S.The Netflix ISP Speed Index is based on data from the more than 33 million Netflix members who view over 1 billion hours of TV shows and movies streaming from Netflix per month. The listed speeds reflect the average performance of all Netflix streams on each ISP's network and are an indicator of the performance typically experienced across all users on an ISP network.Note: the average performance is below the peak performance due to many factors including the variety of encodes Netflix uses to deliver the TV shows and movies as well as the variety of devices members use and home network conditions. These factors cancel out when comparing across ISPs.Joris
Joris Evers is director of corporate communications at Netflix 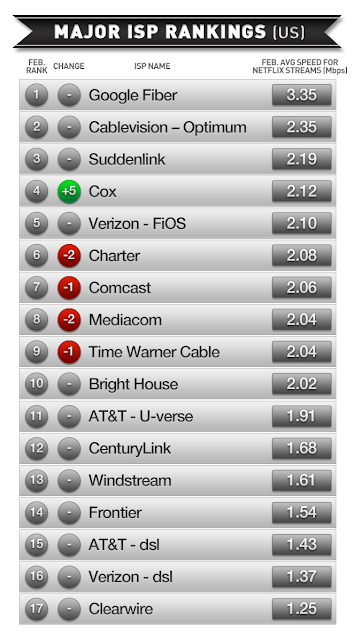