Google wants to speed up the mobile web with AMP project 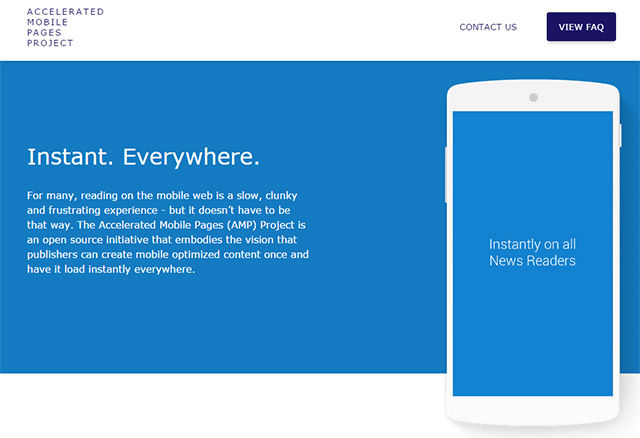 Google has a plan to speed up mobile Web browsing. The recently unveiled AMP—Accelerated Mobile Pages—project is an open source initiative that restricts certain elements of HTML, CSS, and JavaScript to produce leaner Web pages "that are optimised to load instantly on mobile devices." How much quicker is "instantly"? According to Google, early testing with with a simulated 3G connection and a simulated Nexus 5 showed improvements of between 15 to 85 percent.

It's all very clever, but at the same time very simple. "AMP HTML," which sits at the core of the idea, wants to do things like minimize HTTP requests to fully lay out a document and only downloads images when they're likely to be seen. There is a trade-off, however. Third-party JavaScript code, for example, has no place in the AMP environment. Even CSS is being constrained; properties like transition, filter, and animation are currently banned. You won't be able to implement scroll bars either, or have a CSS stylesheet that exceeds 50,000 bytes.

According to AMP tech lead Malte Ubl, part of this decision can be attributed to the performance issues caused by the usage of multiple JavaScript libraries, tools, embeds, and so forth. Ads and analytics are being subjected to similar treatment. AMP disallows ads from being directly embedded into a website, requiring instead that they are placed into sandboxed iframes with no access to the primary documents. On the other hand, it's possible to embed analytics that utilise so-called "tracking pixels" in AMP documents. Anything that requires the use of JavaScript, however, remains unsupported.