The Skimmer project, or “All Things N.C. State,” included adding and rewriting code in order to add features as well as optimize existing code.

The main features that we added are:

Sound effects
An additional option was added to the sidebar for sound effects. These sound effects are heard when bubbles two or more bubbles collide.

A “Pointer Bubble”
This bubble is an additional bubble that follows the user’s mouse, allowing for a more interactive environment. Users can user the pointer bubble to repel other bubbles, or on the tablet version, repel bubbles with one finger while attracting them with another.

“Drag and Drop” Bubbles
A drag and drop feature was also added. This allows viewers to move bubbles around the screen, adding to the overall interactive nature of the bubbles.

We not only added new features, but also improved existing features. Changes were also made to:
Sidebar reorganization
The sidebar was reorganized to reflect the new features that were added as well as some features that our clients did not want, such as the keyword search and toggle between vibrant colors and vibrant images. We also added the option for turning the pointer bubble and sound effects on and off.

Prevent duplicate images
In the original version, bubbles with different keywords would be linked to the same article and therefore producing bubbles with duplicate images. Having these duplicate images reduced the visual appeal of the bubbles, so we created a check that only allows one image with a particular URL. Also, image bubbles are now separate from their corresponding keyword bubble, allowing the viewer to see more relative keywords.

Improve Runnability
We also improved the overall runtime of the project. This was done by attempting to optimize the code as well as fixing some errors involving how the code requests images. Additionally, the code was optimized for tablets to allow users to interact with bubbles using multitouch.

Increased interactivity within tablets
Not only was the code optimized for tablets, but the project running on a tablet provides an additional feature. The multitouch input of a tablet allowed us to create different bubble reactions depending on whether the touch was the first or second touch. On the first touch, bubbles are repelled while with the second touch, bubbles are attracted. Even though there is no specific “purpose” for this feature, it greatly increases viewer interactivity with the bubbles.

Future suggestions
While our project may look nice on the front end, the code on the backend is extremely unorganized due to the previous developers and designers. As a result of this chaos, the web application uses an extreme amount of memory and processing power while running. Although this may be acceptable for now, a useful project in the future would be to refactor the code completely, allowing it to conform to Javascript coding standards. 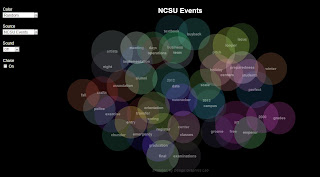